Three Excuses Stopping You from Getting Your US Taxes In Order

As almost everyone is aware, US citizens are taxed on their worldwide income regardless of where they live and where the income is earned.

Over the past several years as a result of FATCA, exchange of information agreements and the overall financial transparency of the modern world, taxing authorities now have the resources to identify income earned by its citizens and residents worldwide.

The fact is governments are cooperating with each other now more than ever in an effort to combat international tax evasion.

The recent disclosure by the US of bank accounts held by Israeli citizens in the United States to the Israeli tax authority is a perfect example of this cooperation.

In this current environment, US taxpayers need to carefully consider the best way to come into compliance with the US tax system and at the same time limit their exposure to back taxes, penalties, etc.

How to enable a delinquent US taxpayer to become compliant is a question that tax authorities such as the IRS have struggled with. Focusing on the IRS and the history over the past decade or so of its Voluntary Disclosure Program best illustrates this point.

First, there are several common misconceptions that need to be dispelled:

1) “If I have not been compliant until now, I will simply start now and going forward.”

Almost all disclosure programs worldwide designed to bring taxpayers into compliance focus on past non-compliance. They want to clear up the past before moving forward.

2) “The US and other countries are only going after the ‘big fish’.”

Although it is true that taxing authorities tend to allocate greater resources to larger cases, current enforcement efforts are intended to cast out a wide enough net to ensure even the “small fish” are picked up as well.

3) “The IRS and other taxing authorities are unreasonable, overreaching, and greedy.”

As mentioned earlier, the IRS has struggled in its attempts to develop programs effective in bringing taxpayers into compliance. At first, they offered the Offshore Voluntary Disclosure Program. This program involves the imposition of penalties on previously undisclosed assets in exchange for taking the risk of criminal prosecution and severe statutory penalties for past non-compliance off the table. However, most US persons living outside of the United States do not need the legal protections provided by this program.

As the volume of these “alternative procedures” increased, the IRS developed a program that is better suited for taxpayers without any criminal exposure. The second program, known as the Streamlined Program in both its domestic and offshore versions, that allows taxpayers to disclose past non-compliance without being required to pay the high penalties of the Offshore Voluntary Disclosure Program in exchange for protections they never needed.

As these developments indicate, we see that the IRS has reserved its most stringent procedure for disclosing past non-compliance for those who have intended to evade taxation.

In my experience over the past several years of speaking to people and listening to their fears and anxieties over their outstanding tax issues – the biggest obstacle that must first be overcome is the taxpayer’s overwhelming fear that coming into compliance will be too costly and painful. Although there are certainly those individuals who need the protection of the more stringent Offshore Voluntary Disclosure Program, for the vast majority of people, coming into compliance is relatively painless and affordable.

In conclusion, in the current environment of transparency and governmental exchange of information agreements, doing nothing about your taxes is never your best option. 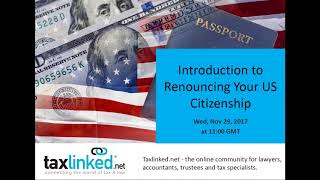 Introduction to Renouncing Your US Citizenship & Its Tax Implications

Three Excuses Stopping You from Getting Your US Taxes In Order